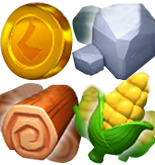 Rise of Kingdoms was previously known as "Rise of Civilizations", which is developed and published by Lilith Games on September 20,2018. As a civilization-building game, players can create a civilization from nothing and attempt to build a great empire.

Rome wasn't built in a day they say, and your city won't be either. Will you launch epic wars and conquer the entire world? Or rise up as a virtuous leader renowned for your sagacity?Will you dedicate yourself to helping your own people? No matter what kind of people you want to be, Rise of Kingdoms can satisfy your requirements. Kingdoms rise and kingdoms fall. Will you be able to assert your sovereignty and rise above it all? The foremost tasks of the game like upgrading buildings, training troops and doing research all require Rise of Kingdoms food, stone and wood, these three resources are vital to progress.

And except for these three resources, you also need castles. The Castle is a building which allows the governor to organize rallies. After each upgrade, the number of troops that the leader can command in the rally is increased.

These all the core resources in Rise of Kingdoms, you can build your kingdom now by Buying Cheap Rise of Kingdom Resources that fits right in your budget!

If you are searching on Google:"Buy ROK Resources" and find our website, then you are at the right place. We mmokr.com will offer the best price, safe & fast delivery, and 24/7 live support.