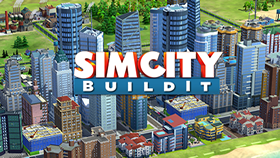 BuildIt is a city-building simulation mobile game. Developed by Tracktwenty and published by Electronic Arts, it was launched in late 2014. The game is part of the SimCity franchise.

SimCity: BuildIt is a game developed for mobile gameplay. It is available for download for iOS , Android and the amazon appstore. It is a free simulation game in the app store and play store.

This game allows users to solve real-life situations like fire, pollution, and traffic and helps in dealing with problems that the public faces. Players can connect and compete with other users for more connected gameplay.